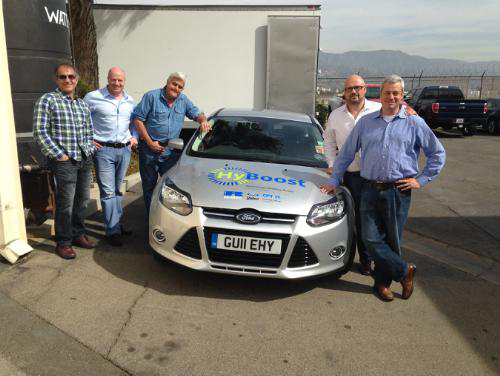 Van Buren Township-based Ricardo makes a cameo in the latest video on Jay Leno’s Garage, a website devoted to the comedian’s automotive interests.

In the 16-minute segment, Leno test-drives a modified Ford Focus featuring Ricardo’s HyBoost demonstrator and compares the effects of the engineered changes to the baseline vehicle by turning the system on and off.  His verdict? “I think this will probably be the future of hybrid,” says Leno in the clip.

In upgrading the Focus, Ricardo downsized the vehicle’s 2-liter stock engine to a 1.1 liter and added a turbo charger as well as an electric supercharger for improved fuel economy and better performance at minimal cost.

“You have a smaller engine in there but it feels like a very torque-y, peppy engine that’s fun to drive,” said Tom Apostolos, president of Ricardo, who was on site during the filming in Burbank, Calif.