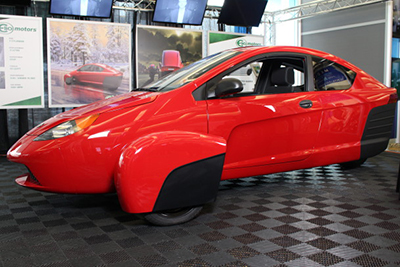 Elio Motors Inc., a developer of three-wheeled vehicles, has selected Livonia-based Roush as its lead engineering supplier. Additionally, the Phoenix-based automaker says it plans to sell 100 pre-production vehicles to fleet customers by the end of 2016, but has delayed the bulk of the consumer launch to 2017.

Paul Elio, founder and CEO of Elio Motors, says Roush will provide engineering, testing, prototyping, and assembly support for Elio’s vehicle, which will get up to 84 miles per gallon and have a base price of $6,800.

“We chose Roush to be a key supplier partner because of the breadth and depth of their automotive development expertise,” Elio says. “Technology companies across the globe have recognized that Detroit remains the center of automotive innovation, and in that arena Roush’s engineering and integration capabilities are unparalleled.”

He says the 100 pre-production vehicles were originally intended for internal use as previously disclosed in an offering statement filed with the U.S. Securities and Exchange Commission.

“This will help us generate additional revenue, it will allow us to evaluate vehicles under real-world driving conditions, and it will allow our supplier team to refine our design,” Elio says. The price for the pre-production vehicles has not been determined.

He says the pre-production vehicles will help Roush to provide a quieter, smoother vehicle.

Elio says the company seeks additional funding in order to get the vehicle to the 50,000 people with reservations.

“We recently had a successful stock offering, which showed there is investment interest and enthusiasm for this project,” he says. “We raised significant funds, moving us even closer. Our team will keep fighting to get this done.”

The vehicles are manufactured in Shreveport, La. at a former General Motors Co. production facility. Elio says when Elio Motors reaches full production, it estimates that the facility will be home to 1,500 employees.