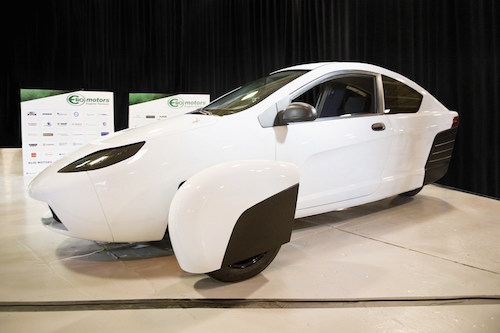 Elio Motors Inc., a startup vehicle manufacturer, has completed the first test vehicle for its E-Series model that will be used by the company and its suppliers for calibration and testing in its Livonia facility.

With a targeted base price of $6,800, the company’s E-Series vehicles feature three wheels and get up to 84 mpg via a SOHC gas-powered, three-cylinder engine. With a top speed of more than 100 mph, the vehicle can go from 0-60 in 9.6 seconds.

“The completion of the first E-Series vehicle signals the launch of another critical phase in our journey,” says Paul Elio, CEO of Elio Motors. “The real-world performance data that we gather through the E-Series testing will allow our team to make final adjustments prior to tooling up for production.”

Elio says the company, which selected Livonia-based Roush as its lead engineering supplier in March, plans to build a total of 23 E-Series vehicles to test for safety, aerodynamics, and durability.

He says once the testing phase is concluded, Elio Motors will begin preparations for building 100 pre-production vehicles at its manufacturing facility in Shreveport, La.

“(Testing) will give our world-class supplier teams the opportunity to make final adjustments that will get our design closer to the manufacturing stage and to our targeted ‘must have’ goals,” says Gino Raffin, vice president of manufacturing at Elio Motors.

The E-Series completion was funded in part by the crowd-funded stock sale the company completed earlier this year. Elio Motors raised nearly $17 million through Regulation A+, which allows private companies to raise funds from accredited and non-accredited investors.