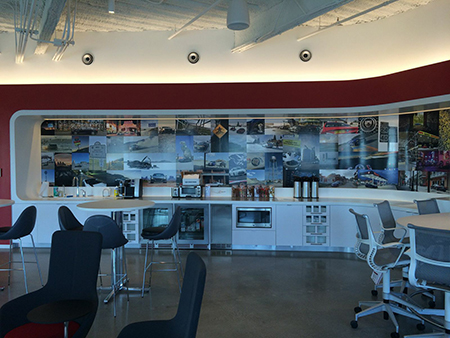 Edmunds.com — a car-shopping website visited by about 18 million visitors each month  — announced today the move of its regional satellite office from Southfield to downtown Detroit.

“The opening of our new downtown location shows our renewed commitment to Detroit, the heart of the auto industry,” says Avi Steinlauf, Edmunds.com CEO. “We were inspired by Dan Gilbert’s revitalization work and the enthusiasm Quicken Loans employees have for the city’s resurgence. Our Detroit-based employees are very excited to be a part of the downtown Detroit renaissance.”

The 5,000-square-foot satellite office at 150 W. Jefferson will serve as a base for regional meetings and collaborations for the nearly 100 employees based throughout the eastern United States.

The new location features an open office design created by Chris Mitchell of M+M Creative Studio in Las Vegas. The office mirrors the color blocks and modern design of the company’s Santa Monica headquarters, home to approximately 500 employees.
The automotive website has also launched the Rebuild Detroit Brick by Brick Campaign— a grassroots effort to restore Hart Plaza. The campaign allows donors to make contributions toward the restoration of Hart Plaza, which experienced $1 million in vandalism-related damage in 2013 and is located directly across the street from Edmunds new office.

“The (Big Three) automakers have been critical to our success over the years, and we are excited to join them in the rebuilding of the industry’s historic birthplace,” Steinlauf says.

Patrons’ names will be inscribed on pavers that will be installed in the plaza near the park’s amphitheaters and the Horace E. Dodge and Son Memorial Fountain. More information is available at edmunds.com/brickbybrick.