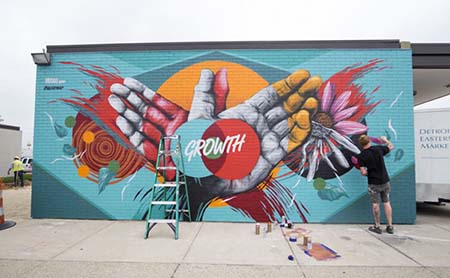 Eastern Market Corp. and Detroit-based fine art publisher 1xRUN have partnered to bring 45 artists to paint large-scale murals in Eastern Market throughout September. The event is called the Murals in the Market festival.

“As a publishing company, 1xRUN works with artists from across the globe, and over the years we’ve built relationships with many local and international artists…” says Jesse Cory, CEO of 1xRUN. “These artists represent some of the best from Detroit and the world and having them spend time together will further build on the growing movement of Detroit as a place for the arts.”

Artists include New Zealand-based public artist Askew; Fel3000ft, who painted the mural on HopCat in Detroit’s Midtown district; Detroit-based Ellen Rutt, who painted a mural at The Dequindre Cut; Chicago-based Hebru Brantley, who was commissioned to create eight panels of public artwork for the Chicago Transit Authority; the Eastern-Market based art group, Hygenic Dress League, who’s known for its gas mask images; and Detroit-based Kobie Soloman who created a mural for the Russell Industrial Center, among others.

Cory says 1xRUN and the company’s fine art gallery Inner State have produced more than 30 murals in Eastern Market in the past four years. He says 1xRUN has curated and produced about 100 murals throughout the city of Detroit, including the 2011 Detroit Beautification Project.

Eastern Market will also host a series of events to coincide with the painting of the murals, including panel discussions with artists and farmers, a cultural tour with the Slow Roll bike group, a movie premiere, and a block party from Sept. 17-25.

Local businesses and other individuals can sponsor an individual mural. For more information, visit MuralsintheMarket.com.