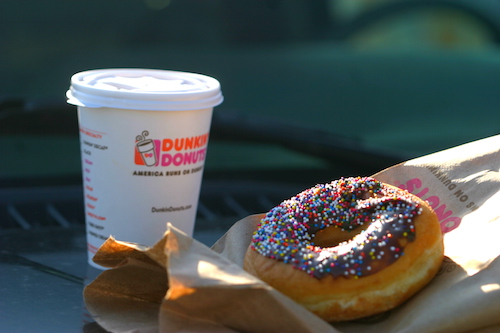 “It’s great to see Detroit strong again. The regional market has been very good to us,” says Nigel Travis, chairman and CEO of Dunkin’ Brands in Canton, Mass. (south of Boston), who is in town this week visiting stores, touring the newly opened Jimmy John’s Field in Utica where the company just signed a sponsorship, and playing in today’s Bob Bennett Memorial Classic Golf Outing at Fox Creek Golf Course in Livonia.

“My wife, Joanna, is from the region and was a former city attorney for Livonia, and her (late) father was the former mayor of Livonia, so Detroit is a place I visit often, including every Christmas. I’m headed over next to meet Detroit Mayor Mike Duggan, who actually knows my wife from when he was assistant Wayne County executive.”

In July, the company will open a Dunkin’s Donuts outlet at the southeast corner of Plymouth and Wayne roads in Livonia. The company plans to add at least five more stores in Detroit, including a location in the downtown district. “We’re still reviewing locations and potential operators, but we’d like to see at least one Baskin Robbins downtown along with a Dunkin’ Donuts,” Travis says. “We want to be part of the resurgence in Detroit.”

The company recently opened a Dunkin’ Donuts outlet at FCA Group’s headquarters in Auburn Hills, and operates two locations in Detroit, one at Wayne State University along with a concession stand at Comerica Park.

“I will say this about metro Detroit, our combo stores here have the highest average weekly sales than any other market in the United States,” Travis says. “This week we also launched on-the-go (digital) ordering, which cuts out 30 percent of the ordering process. When you arrive at the store, everything is waiting for you.”

He adds the company generates 60 percent of its annual revenue from beverage sales, with coffee leading the way. “We are always introducing new coffees, drip coffees, and espressos,” he says. “We add a new sandwich every two months or so, and we have some exciting things on the drawing board.

“We also support American charities. Over the last two years here, we’ve donated $40,000 to Gleaners Community Food Bank. Since most of our locations are franchises, our relationship with our franchise partners and local communities is very important to us.”