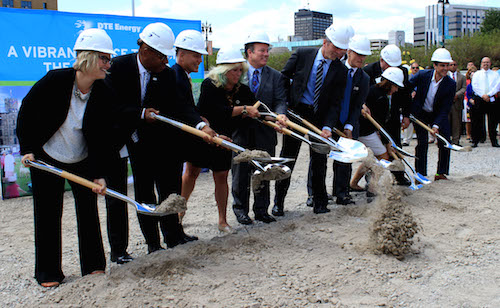 “Our vision and promise is to transform this piece of land into a magnificent public green space that will benefit the city and its people for generations to come,” says Gerry Anderson, chairman and CEO of DTE Energy. “This park will serve as a catalyst for future development, and builds upon our strong roots in the community.”

The 56,000-square-foot park, which is scheduled for completion in 2017, will feature a central lawn with walking paths, areas to sit, a multiuse space for programmed activities, a roll-in stage for performances, areas for food truck vendors, and bicycle parking.

The park will also house a new restaurant, which will have three moveable walls that can open during warmer seasons.

The restaurant will include a bar and eating areas that can seat up to 75 people, a 735-square-foot roof deck, and a green roof space designed to collect runoff water and repurpose it for trees, grass, and plants.

“For all of the construction and redevelopment we are seeing in greater downtown, providing access to green space is just as important to our city’s growth,” says Detroit Mayor Mike Duggan.

The construction costs for the project are being funded by separate non-utility DTE business.

A crowd-sourcing campaign will be held closer to the opening where the general public can suggest names for the new enclave.