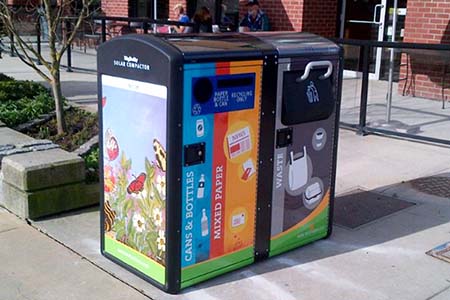 Detroit-based DTE Energy will install seven solar-powered trash compactors and recycling units, called Bigbelly’s, in downtown Detroit this summer in an effort to eliminate trash overflow and protect the environment.

“We believe the Bigbelly project will be good for our customers, our employees, and the Detroit neighborhood where we are based, (as well as) the larger Detroit community we serve,” says David Meador, vice chairman and chief administrative officer for DTE Energy. “We hope other companies will consider these cost-effective units to achieve critical mass toward creating a cleaner, greener community.”

Meador says the solar unit extracts energy from the sun to continually charge the battery powering the system. When the unit needs to be emptied it sends a signal via a software Waste Management of Michigan, who will install and maintain the units for DTE Energy. He says by eliminating trash overflow, the neighborhoods will be cleaner and pests will be kept away.

The fully-enclosed bins, which cost about $4,000, have a capacity to hold 50 gallons. Bigbelly units can be found in parks and beaches in several cities, including Boston, Cincinnati, Chicago, and New York.

DTE Energy will set up the units at the Third Street bus stop area across from the MGM Grand Detroit, the Navitas House office building at Bagley Avenue and Third Street, and in the utility’s food truck area near its entrance. The utility also will house four units inside its headquarters complex in downtown Detroit.