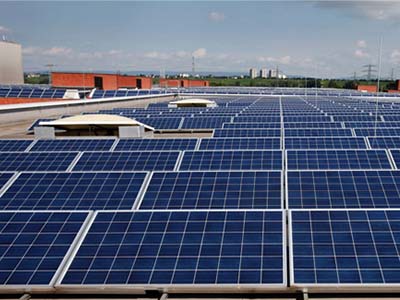 Detroit-based DTE Energy and General Motors will build a solar array at the automaker’s Warren Transmission plant they say will generate the energy equivalent of powering nearly 140 homes a year.

“By supporting this project and making renewable energy commitments globally, we will surpass our goal to promote 125 megawatts of clean power by 2020,” says Rob Threlkeld, global manager of renewable energy at GM.

Threlkeld says the nearly 3,000 solar panels will generate about one million kilowatt-hours of electricity per year. DTE Energy will own the array on more than four acres of land leased from GM.

The Warren Transmission plant builds front-wheel drive transmissions for a variety of GM’s cars, crossovers, and SUVs, as well as the drive unit for the 2016 Chevrolet Volt. Threlkeld says the facility is also landfill-free, meaning it reuses, recycles, or converts to energy all waste from daily operations.

GM has 46 megawatts of solar power at nearly 20 facilities across the world, including Germany, Ohio, and California. The solar array at the Warren Transmission plant will be GM’s largest solar array in Michigan. GM also has a solar array at its Warren Technical Center.