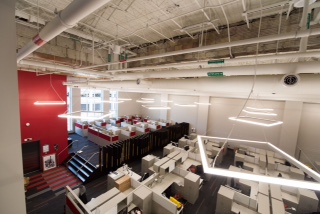 DTE Energy announced today that it has completed renovations on the former Salvation Army building in Detroit, located across the street from the company’s headquarters. The 32,000-square-foot, three-story building, which stood vacant since 2004, will soon be home to about 140 employees from DTE’s IT department.

“DTE has made a commitment to assist the rebuilding of Detroit,” says Ron May, DTE Energy’s executive vice president of major enterprise projects. “Among many other actions taken to support this commitment, we recognized an opportunity to refurbish the historic Salvation Army building, and in doing so renamed it the Navitas House (Navitas meaning ‘energy’ in Latin).”

DTE — which worked with the Detroit-based architectural firm Hamilton Anderson Associates and general contractor L.S. Brinker — preserved much of the Art Deco elements during the Navitas House reconstruction, including the historic attributes of the main lobby, as well as terrazzo floors and marble walls in the bathrooms, while also making it energy-efficient.

The purchase and renovation of the building on Bagley Avenue is part of DTE’s strategy to help transform its campus and the surrounding area into a neighborhood that is more inviting and commercially viable.

“One of the keys to urban revitalization is to bring vacant buildings back to life, which helps the street feel more alive, makes it safer, and improves the overall stability of the neighborhood,” May says. “This beautiful building stands now as a symbol of our work to help energize Detroit.”

In a separate development project, DTE is expected to break ground on a new park just east of its headquarters in the spring. Plans call for the now-empty lot to become a public gathering place for downtown employees, residents, and visitors.