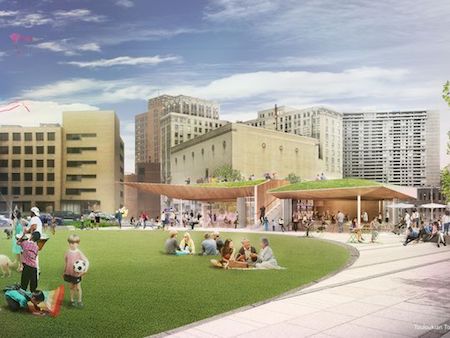 Detroit-based DTE Energy today announced a partnership with local restauranteurs Norm and Bonnie LePage to operate a restaurant that will anchor the company’s new public park, located at Cass and Grand River avenues, just east of the company’s headquarters. DTE’s new park is located between the entertainment district, the Central Business District, and Corktown.

Current plans for the restaurant include connected indoor and outdoor dining spaces, an outdoor staircase leading to a green rooftop dining space with panoramic views of the city and skyline, and a ceiling made of Sapele mahogany wood, which was sustainably harvested by responsibly managed forests.

Architectural firm Toulukian Toulukian Inc. designed the rooftop’s green space, while the interior and patio design was by Victor Saroki, an architect in downtown Birmingham. Kelly Building Co. is performing the build out of the space.

“We’re so pleased that the LePage family is partnering with us on this restaurant,” says Gerry Anderson, DTE Energy chairman and CEO. “They bring decades of experience in operating distinctive restaurant concepts in southeastern Michigan. The LePage family’s culinary point-of-view will complement the iconic architecture and ambience of this restaurant.”

The restaurant will be the LePage’s first Detroit dining establishment, having operated restaurants throughout southeastern Michigan for more than 40 years. Their portfolio includes Clubhouse BFD in Rochester Hills, and Big Rock Chop House and Griffin Claw in Birmingham. They also operate The Reserve, an event space next to Big Rock.

The park is will be programmed and operated by the Downtown Detroit Partnership, and will be open in July. The restaurant, currently under construction, is scheduled to open this fall. Details on the restaurant will be released at a later date.