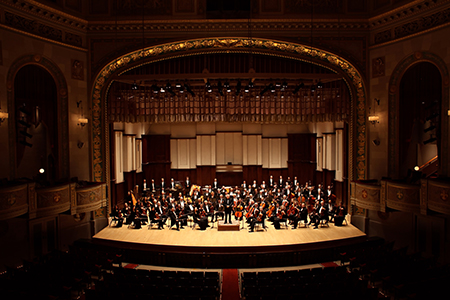 The Detroit Symphony Orchestra and its musicians announced today that they have approved a new contract nearly eight months prior to the current contract’s expiration on Aug. 31.

“This contract represents a turning point in the history of the DSO,” says Anne Parsons, president and CEO of the Detroit Symphony Orchestra. “The terms prioritize the DSO’s legacy of artistic excellence while continuing to position this organization at the forefront of innovation and accessibility.”

The agreement between the DSO and the members of Local 5 of the American Federation of Musicians — which takes effect Sept. 1 and extends through August 31, 2017 — represents 87 employees, including two librarians. The contract stipulates 36 weeks of performances and four weeks of vacation time. Over the life of the new contract, the total orchestra compensation, including salary and all benefits, will increase 5.3 percent over the previous, three-year agreement.

Per the contract, the orchestra will continue to offer free live webcasts, a popular feature that started in 2011. “The whole idea is to make the DSO the most accessible orchestra on the planet,” says Antoine Dubeauclard, president of Media Genesis in Troy, which handles the orchestra’s website and social media offerings. “In the near future, the DSO will be investing in new equipment such as more stationary cameras and technology. While it’s free, we do draw a lot of donations on the site.”

The orchestra will continue its Neighborhood Residency Initiative, where musicians perform at selected venues in Beverly Hills, Bloomfield Hills, Canton, Dearborn, Grosse Pointe, Southfield, and West Bloomfield. The musicians’ work at the Detroit Medical Center Children’s Hospital, senior living communities, and other community venues will continue through an extension of the “optional work” model provided for in the current contract.