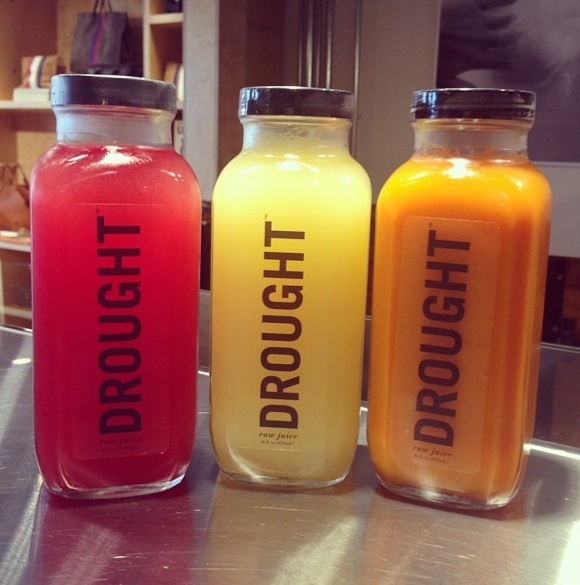 Julie James, co-founder of Drought, a manufacturer of organic, cold-pressed raw juices in Ferndale, says the company will open additional storefronts in Royal Oak and Birmingham by the end of August, and has plans to increase distribution after implementing a new high-pressure process that will nearly triple the shelf life of the company’s beverages.

“This is something we’ve been working on slowly over the past two years,” says James, who co-founded Drought with her four sisters in 2010. She says the siblings will roll out the new process — which uses elevated pressures to kill bacteria within the raw juices — within the next 60 days. The company has been working with Garden Fresh Gourmet in Ferndale, owned by Jack Aronson.

Because of regulations from the Michigan Department of Agriculture, Drought has been unable to sell their product wholesale to retailers, leaving them to distribute their beverages directly to consumers via their standalone store in Plymouth and locations in Willys Detroit in Midtown and Parker Street Market in West Village.

By using high-pressure processing, the company will be able to produce juices with a shelf life of up to two weeks in addition to their original product line, which lasts three to five days. With a longer shelf life comes the opportunity for greater distribution opportunities, James says.

In time, James expects the company will increase its production capacity, but for now, their current manufacturing facility — a 3,500-square-foot space in Ferndale used by Garden Fresh Gourmet — is sufficient.

“We have a very efficient process,” she says. Four pounds of produce goes into each bottle, meaning the Ferndale facility goes through “literally tons” of fruits and vegetables each week. She adds that the most popular items include the nutrient-dense Green No. 1, which consists of chard, cabbage, apple, celery, kale, and lemon, as well as the apple-lemon-ginger combo.

She adds that the company will continue to offer its unadulterated juice line while expanding to include the more shelf-stable line. “It’s the most energetic raw state that juice can be in. By not adding any processing to it, it’s raw juice in its purest form — and there’s a big market for that.

James says Drought will open a standalone storefront at 28822 Woodward in Royal Oak (on the east side, south of 12 Mile Road) as early as Friday (although given expected traffic resulting from Saturday’s Dream Cruise, it may get pushed into next week).

The new facility will include retail space in the front and a conference room in the back. It will serve as the company’s main office.

After the Royal Oak opening, Drought will open a location within the Center for Yoga, at 555 S. Old Woodward Ave. in Birmingham. Looking forward, the company plans to break into the Ann Arbor market in the near future, James says.

For more information about Drought’s locations and hours, visit droughtjuice.com.