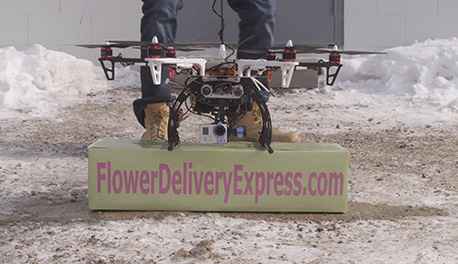 Riding the wings of opportunity, Wesley Berry, owner of Wesley Berry Flowers and FlowerDeliveryExpress.com, both in Commerce Township, is one of the first business owners in metro Detroit to use a small drone to deliver a package, in this case a box of flowers, to a private home. The five-minute test flight — recorded on video — was undertaken last Saturday in West Bloomfield Township.

Inspired by a recent video from Amazon, which showed a drone making a delivery, Berry says the use of unmanned aerial vehicles is still in its infancy. “The drone we used in the video won’t fly again, but we’re assembling a new ($7,000) drone right now that we plan to test in March,” says Berry, noting his companies will make 50,000 deliveries around the world in the lead up to Valentine’s Day on Friday.

“Flying drones isn’t economically viable yet, but we’re experimenting with it, and I think the industry is a couple of years away, or even three or four years away. But we need to stay ahead of the curve. Right now, the (frigid) weather takes a toll on the batteries. It’s not shelf ready yet.”

While the use of commercial drones in U.S. airspace is strictly regulated (UAVs must stay below 400 feet and be in constant view of the operator), the FAA and NASA have been directed to issue new rules for the industry by 2015. But in recent testimony before Congress, FAA officials said the rules for commercial drone flights might not be ready until 2016. 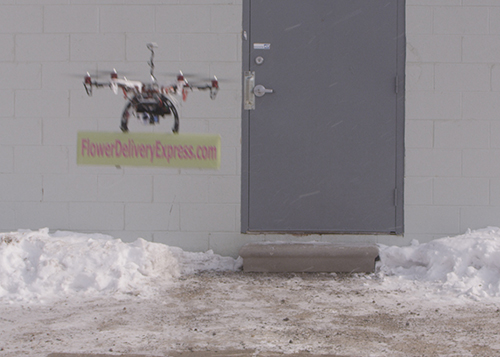 Berry says he’s setting up a beta program to test alternate delivery methods and other development efforts. He’s also started testing delivering pre-made bouquets via trucks. “We want to offer new and exciting experiences to our customers, so we’re asking for their help to keep our products innovative and relevant,” Berry says.

Wesley Berry Flowers operates five stores in metro Detroit, and between the two companies, there are 130 employees. The enterprise got its start in 1946.

To view the video of the drone delivering flowers, click here.

To submit an application to join the beta group, visit FlowerDeliveryExpress.com/beta.