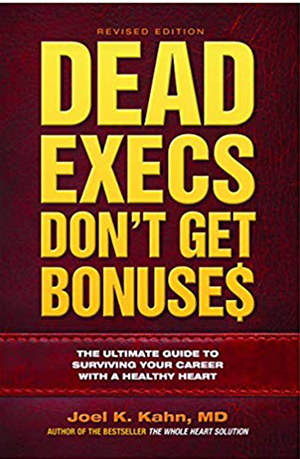 Dr. Joel Kahn, a cardiologist and clinical professor of medicine at the Wayne State University School of Medicine in Detroit, has published his latest book, Dead Execs Don’t Get Bonuses: The Ultimate Guide to Surviving Your Career with a Healthy Heart.

Kahn, who has written Your Whole Heart Solution and The Plant Based Solution, says the problem of executive health is a real one with cardiovascular disease, such as heart attacks and strokes, ranking as the biggest threat to life and livelihood.

Kahn, founder of the Kahn Center for Cardiac Longevity in Bingham Farms and Grosse Pointe Farms, says “the chief of cardiology at Harvard University declared over 60 years ago that heart attacks were preventable. We have not realized that challenge. Sadly, the first introduction to heart disease could end a person’s career or lead to death.

“After the death of the Provost at the College for Creative Studies in Detroit in 2012, Imre Molnar (at age 60), I reached out to his wife, Felicia Molnar, and launched a campaign to end heart attacks through protocol based advanced testing and disease reversal with lifestyle medicine”.

Kahn, an associate professor of medicine at the Oakland University-William Beaumont School of Medicine in Rochester Hills, says people can lower their risk of a heart attack or a stroke through a science based and aggressive health program outlined in the book.

Kahn has been lecturing on the topic nationwide for several years, and his new book was released by Healthy Living Publications on Aug. 1. It quickly reached No. 1 on Amazon for all cardiology books.

Kahn says an earlier version of the book was distributed at corporate events. In addition to speaking, writing, and practicing preventive cardiology, Kahn has opened three health-based restaurants with his wife, Karen, and their son, Daniel. GreenSpace Café opened in Ferndale in 2015, and in 2018 both Greenspace & Go (Royal Oak) and ATX Food Co. (Austin, TX) have opened.

The book is available at area books stores and on Amazon for $12.95. For more information on Kahn, visit www.drjoelkahn.com or www.kahnlongevitycenter.com.