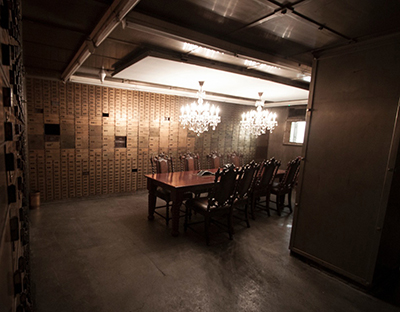 After working together on design and facilities management for Quicken Loans over the past year, the company’s facilities team and Doodle Commercial are now collaborating on People, Offices and Places, or dPOP!.

Launched Thursday, the company’s headquarters are located in the lower level of Chrysler House in downtown Detroit and includes a repurposed 1920s-era vault, which has been converted into meeting space. The team’s portfolio also includes offices in the Compuware Building, Madison Building, and Chase Tower.

Part of the Rock Ventures family of companies, dPOP! provides office design services, moving coordination, furniture procurement, and facilities management. As Quicken Loans has gained experience working in an urban environment, “it was the natural next step to offer these services to others,” says Jennifer Gilbert, founder of Doodle Home/Doodle Commercial and chairwoman of dPOP!

Melissa Price, dPOP!’s CEO, says the firm has secured 20-plus clients, which range from small offices to larger projects spanning more than 50,000 square feet in size. While many of the companies are local, some are located out of state in cities like Philadelphia, Dallas, and Tampa.

“Some heard about us through the team members of the Quicken Loans family of companies,” Price says. “Others came to visit, were inspired by our offices, and wanted to have an impact in their own spaces.”

The dPOP! staff consists of five team members, although the Quicken Loans facilities team and Doodle Commercial — which have shared space since January — will still play a role. “We’re one big team, regardless of title,” says Price, who will maintain her current role as director of facilities for Quicken Loans.

“The easy button is just to pick two colors (for your office), but that’s not what we’re about,” Price says. “We’re about matching the office to the company and the culture of the team. It’s really important to create an energy and atmosphere that just draws team members to the space.”