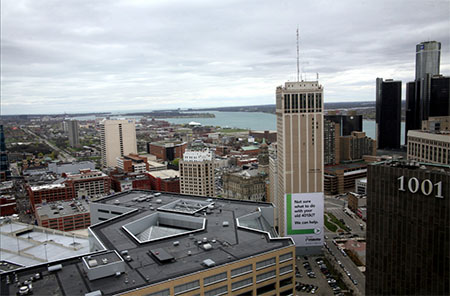 People who live and/or work in downtown Detroit are encouraged with ongoing improvements, but prefer better parking and transit options, says a new survey from the Downtown Detroit Partnership.

“We had broad and diverse participation, four times more people took the survey than we expected, and it’s wonderful to see that people are excited and optimistic about Detroit’s future,” says Eric Larson, CEO of the organization. “The DDP is using this information to inform our activities, promote the positive stories, and to address opportunities for improvement.”

Larson says a strong majority of those surveyed say Detroit has a lot of potential and believe the city’s downtown is improving every year. Ninety-four percent of Detroit residents say they would recommend living downtown, however, 72 percent of the respondents said on-street parking is unsafe and inconvenient, although more than half of the people said there are convenient off-street parking options.

A third of responders felt transit downtown was safe, though only 11 percent agreed it was easy to find information about how to take the bus. About 56 percent said the People Mover was a convenient and safe option for travel.

In late 2016, the M-1 Rail line is expected to open along Woodward Avenue, stretching 3.1 miles from downtown to New Center. In addition, the Detroit Red Wings plan to open a new arena at the northwest corner of I-75 and Woodward, along with commercial and residential offerings.

DDP will be conducting the survey annually.

The survey can be found here.