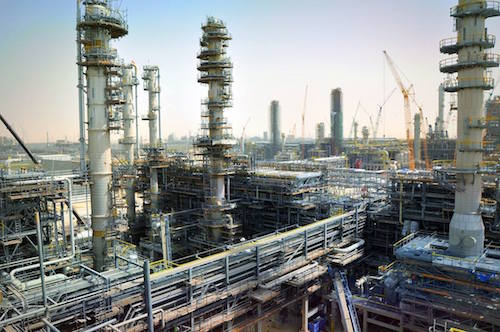 Midland-based Dow Chemical Co. today announced that its $20 billion joint venture in the Middle East with Saudi Arabian Oil Co., called Sadara Chemical Co., has started up its mixed feed cracker, a manufacturing asset that is able to produce ethylene and propylene.

“The start-up of the mixed feed cracker is a pivotal next step in realizing the full value creation of this world-scale integrated complex, which builds upon the unique strengths of its parent companies to deliver a portfolio of differentiated, high-value plastics and specialty chemical products throughout emerging economies,” says Andrew N. Liveris, chairman and CEO of Dow.

He says the ethylene and propylene produced by the mixed feed cracker will be converted into a wide range of value-added plastics and specialty chemicals through Sadara’s other manufacturing units.

The mixed feed cracker is one of 26 manufacturing assets being built at the complex in Jubail Industrial City II, which is expected to be fully operational by the end of 2016, and is estimated to deliver annual revenue of about $10 billion within a few years of operation.

To date, the complex has commissioned two polyethylene trains, qualifying 25 products and shipping polyethylene to nearly 100 customers in more than 25 countries.

Company officials say the more than 3 million metric tons of performance-focused products produced by the facility will add new value chains to Saudi Arabia’s petroleum reserves, which will result in the diversification of the economy and region.

In 2015, Dow had annual sales of nearly $49 billion and employed 49,500 people worldwide. The company’s more than 6,000 product families are manufactured at 179 sites in 35 countries across the globe.