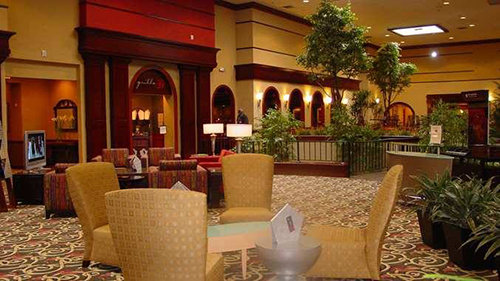 The DoubleTree by Hilton Hotel Detroit-Dearborn is in the midst of what Donald Ponniah, the facility’s general manager, refers to as a “multi-million dollar renovation” that includes fully upgraded guests rooms and a revamped food and beverage program.

The hotel, at the northwest corner of the Southfield Freeway and Ford Road, will complete the upgrade of 347 guest rooms — which include new furnishings and a complete makeover of the bathrooms — this weekend, Ponniah says. It’s the first renovation since 2006. Other plans call for upgraded boardrooms as well as a revamped lobby, which will allow guests to access a high-tech business center while feeling as though they are “walking the promenade,” Ponniah says.

“Detroit is bouncing back, and we believe that Dearborn could use another unique hotel, like The Henry or the Detroit Marriott,” Ponniah says. “We want to make sure that we are one of the contributing players in upgrading Dearborn’s image.”

Guests and visitors may also notice several changes at the hotel’s Grille39, which recently added Chef Guillermo Valencia to the culinary team. With the new chef, whose resume includes the Ritz Carlton Hotel in Paris and the Royal Palace in London, comes a new menu, set to launch at the end of June.

“Our menu will feature Latin infusion with an American twist,” Ponniah says. “There will be tapas, and we’ll have our own homemade pizzas … we believe strongly that a place like Dearborn could use a very upscale food and beverage operation.”

The hotel will launch 24-hour room and maid service once the new menu rolls out, followed by a complete overhaul of the parking lot in July or August.

Overall, the renovations are designed around guest comfort and functionality, says Dilip Hari, COO of DPNY Hospitality, which manages the hotel.

“We considered all guest feedback and are excited to provide an even better experience for our guests with the newest product in the city,” Hari says. “The hotel has been a major landmark in the neighborhood and this renovation speaks to our commitment to preserve, improve, and enhance the property’s appeal further.”

Editor’s Note: An earlier version of this article said the hotel was located in Dearborn. The DoubleTree by Hilton Hotel Detroit-Dearborn is located at 5801 Southfield Expressway, Detroit.