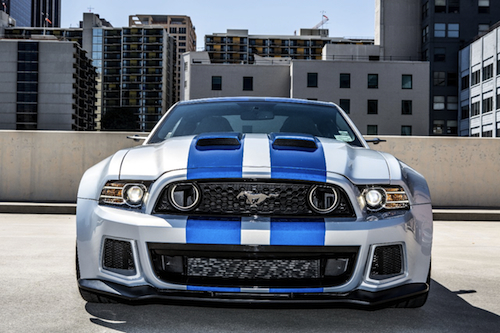 An advertisement for the 2015 Ford Mustang and “Need for Speed,” a film from DreamWorks Studios, debuts this weekend on TV and in theaters.

Directed by Scott Waugh, the film and co-branded ad center around Toby Marshall, played by Aaron Paul, a blue-collar mechanic who races muscle cars on the side in an unsanctioned street-racing circuit. The movie’s climax involves the high-stakes race known as De Leon — the Super Bowl of underground racing.

Waugh, who has worked on such films as “Speed” and “The Italian Job,” selected a modified Mustang GT to serve as Marshall’s ride. Raised in a stunt family, Waugh followed his father into the business and learned to drive when he was just 12 years old.

“The best movie cars combine tons of power, rear-wheel drive, great handling, and the ability to be easily flung around corners,” Waugh said. “As we’ve seen hundreds of times over the years — from ‘Bullitt’ to ‘Gone in Sixty Seconds’ — Mustang fits the bill perfectly, and it’s really a car that represents American culture at its best, which is why we chose it.”

Competing with the Chevrolet Camaro and Dodge Challenger, Ford hopes the ad and movie combo will make the new Mustang stand out. “This is the first time anyone will get to see the new Mustang in a film,” said Steve Ling, a Ford car-marketing manager. “We hope the movie gets the audience really excited about what automobiles are all about, (and) to understand the passion that goes into creating Mustang.”

The ad also marks the official launch of the #InaMustang social media campaign, where fans are asked to share stories of where they want to go “in a Mustang” via http://ford.com/inamustang. Ford officials say the automaker plans to highlight the stories through partnerships with influential content creators in social and film networks.

To watch the ad, click here. The film releases in U.S. theaters on March 14.

In other automotive news, Lincoln Motor Co. has teamed up with pop-soul recording artist Aloe Blacc to create an interactive music video for his new song, “Love is the Answer.” To view the music video, click here.