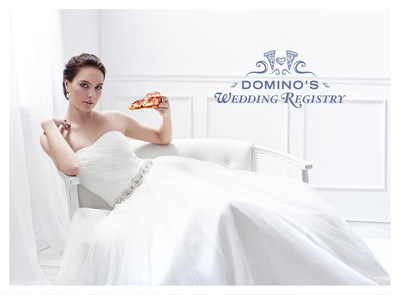 After creating and customizing their registry, couples can select a variety of featured gifts to enjoy before, during, and after their wedding. The options include “Cater the Bachelorette Party,” “Dancing With My Slice,” and “An Excuse Not to Cook,” to name a few.

Registrants then share their wish list with family and friends on social media or with a unique URL, or it can be searched for by guests on the website, like a traditional registry. All gifts will be delivered to the couple via Domino’s E-gift cards.

“We hear often from customers that Domino’s was a part of their big day, from proposals to after-hours meals at their wedding,” says Jenny Fouracre, a Domino’s spokesperson. “We wanted to make it easier for people to ask for and receive something that they’ll really use.”

Domino’s Pizza was founded in 1960, and ranks among the world’s top public restaurant brands with a global enterprise of more than 13,200 stores and global retail sales of over $9.9 billion in 2015.