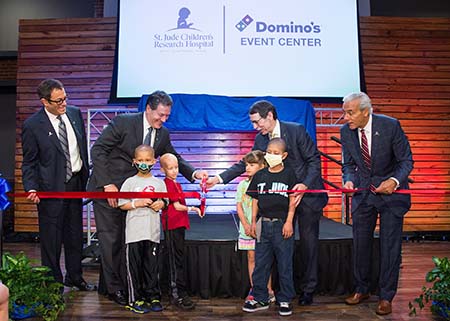 The Domino’s Event Center has opened at the St. Jude Children’s Research Hospital in Memphis, Tenn. after Ann Arbor-based Domino’s Pizza committed to raise $35 million for the hospital. The center will be used for a variety of events including fundraising occasions, patient and family activities, and entertainment.

“St. Jude Children’s Research Hospital has been part of the Domino’s family since 2004 and to date, we’ve raised more than $25 million to support the hospital’s life-saving efforts,” says Patrick Doyle, president and CEO of Domino’s. “The Domino’s Event Center is a magnificent facility that will be put to good use raising funds and awareness for St. Jude.”

In 2014, Domino’s completed a three-year, $10 million commitment made to the hospital in 2012 to help fund the St. Jude Assessment and Triage Clinic.

“The Domino’s Event Center will stand on campus as a permanent reminder of our partnership, and will serve as a celebratory place for our patient families, partners, donors, and supporters,” Shadyac said.