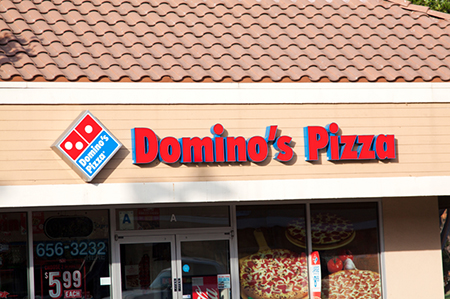 Revenue was up 10.5 percent for the third quarter versus the prior year period, due primarily to higher supply chain revenue from increased volumes and elevated commodity prices, specifically cheese, as well as increased sales of equipment and supplies. Additionally, sales and store growth contributed to increased revenue in all business segments.

In turn, net income was up 16.3 percent for the third quarter, primarily driven by domestic and international same store sales growth and global store count growth, as well as increased supply chain volumes.

“Great people, food, service, and technology have helped us deliver another strong quarter of global sales and profits,” says J. Patrick Doyle, Domino’s president and CEO. “Our franchisees continued to drive vigorous store growth worldwide and have embraced our ‘Pizza Theater’ store reimage program in neighborhoods around the world.”

“We have been reporting positive sales since late 2009 when we introduced our new pizza recipe,” says Tim McIntyre, a Domino’s spokesman. “We’ve been driving a lot of our sales through significant quality changes.” McIntyre points to several recent innovations, including a mobile app that provides for easier ordering.

“Between 40 and 45 percent of our orders today are coming through digital platforms,” he adds.