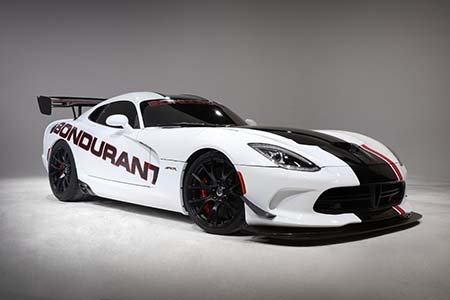 Dodge customers who purchase or lease a 2015 or 2016 Dodge/SRT next year will be eligible to take a high-performance driving class with professional instruction and time on the track.

“We want drivers to develop an appreciation for the levels of performance our Dodge/SRT vehicles are capable of delivering,” says Tim Kuniskis, head of passenger car brands for FCA North America.

“Teaming up with Bob Bondurant, whose method of training has served more than a half-million drivers from around the world for nearly half a century, gives our Dodge/SRT owners the perfect track environment and professional guidance to hone their performance driving skills.”

The school will have nearly 100 SRT vehicles, including the 700-plus horsepower Dodge Charger and Challenger SRT Hellcats. Participants will also have the opportunity to drive the Dodge Viper ACR, the fastest street-legal Viper track car.

“In 47 years of being the global expert on driving instruction, I’ve been waiting for the right circumstances to launch the Bondurant Racing School to honor my championship legacy,” says Bondurant. His entire fleet of cars at the racing school is being converted to Dodge Chargers, Challengers, and Vipers.

SRT customers have one year from their purchase or lease date to sign up for a class at the school.