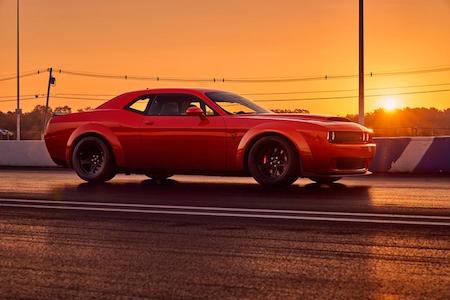 The 2018 Dodge Challenger SRT Demon was introduced this week at the New York International Auto Show and features a 840-horsepower, supercharged 6.2 liter HEMI engine, which can accelerate from 0-60 miles per hour in 2.3 seconds.

The Challenger SRT Demon is also the world’s first production car to lift the front wheels at launch, and set a world record for longest wheelie from a standing start for its vehicle type, with a total of 2.92 feet.

“With Demon, our goal was to build a car that would tattoo the Dodge logo into the subconscious of the general market, beyond even our loyal enthusiasts,” says Tim Kuniskis, head of passenger cars for Dodge, SRT, Chrysler and FIAT, FCA North America. “To do so, we had to set records that have never been set before, do more than has ever been done before, go beyond even the legendary Hellcat. The result: an 840-horsepower, 9-second muscle car unlike anything that has ever come before it.”

The Challenger SRT Demon’s performance is the result of collaboration among the Dodge SRT design, engineering, powertrain, and manufacturing teams within FCA US, many of whom are experienced and active drag racers. While the vehicle is a street car, every component was optimized for weight, capability, and durability during races.

The 2018 Challenger SRT Demon also features factory-installed wider radials for improved grip and 40 percent better launch force, a SRT power chiller to redirect air conditioning to chill the charger air cooler, an after-run chiller to operate after engine shutdown, and TransBrake, which locks the output shaft of the eight-speed automatic transmission to hold the car before launch, allowing the driver to increase engine output for higher torque and quicker response.

Production of the limited-edition single model year vehicle begins this summer, with 3,000 vehicles allotted for the United States and 300 for Canada. The 2018 Challenger SRT Demon will be delivered to dealerships this fall. Pricing will be announced in the coming weeks.