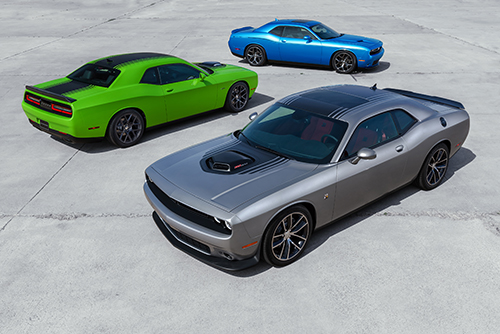 Dodge is celebrating the big 1-0-0 with significant updates to both the Challenger and Charger, both unveiled Thursday at the New York International Auto Show at the Jacob K. Javits Convention Center.

“For 2015, we’re going deep with the remake of the Dodge Challenger,” says Tim Kuniskis, president and CEO of Dodge Brand at Chrysler Group. “The iconic 1971 Challenger inspired the design of this modern day muscle car, but the recreation of this classic styling extends well beneath the surface of the sheet metal.”

Kuniskis says the new Challenger — which can achieve 305 to 485 horsepower based on the engine selected — comes with a completely new interior. Customers can opt for one of 14 designs, including houndstooth and ruby red leather.

The Charger received a full-body makeover, inspired by the 1969 model, with powertrain updates that include a standard eight-speed automatic transmission on both the standard 3.6-liter V-6 Pentastar engine and 5.7-liter Hemi V-8.

“Our Dodge designers have re-sculpted nearly every single body panel of the Dodge Charger for 2015, giving it a sleek, nimble appearance,” Kuniskis says.

Mopar, the automaker’s service, parts, and customer-care brand, says it will have more than 100 accessories and performance parts — including a suspension lowering kit, anti-sway bar kit, and cold air intakes — available when the two vehicles arrive in dealerships later this year.

“We are committed to assisting owners in personalizing each new Chrysler Group vehicle as soon as it is introduced, and even before driving away from the dealership when they use our Mopar Custom Shop option,” says Pietro Gorlier, president and CEO of Mopar.

Both vehicles will be built at the automaker’s assembly plant in Brampton, Ont., with the Challeger kicking off production in the third quarter of 2014. Production for the Charger is slated to begin in the fourth quarter.