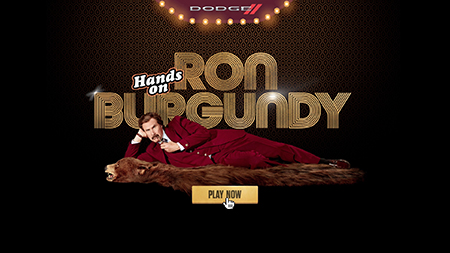 Dodge is offering an all-new 2014 Dodge Durango though Monday to the person who wins “Hands on Ron Burgundy,” a computer game developed from the popular ad campaign starring actor and comedian Will Ferrell. The series has generated an 80 percent increase in visits to the Durango website.

The contestant who “touches” Burgundy the longest via their mouse or touchscreen in a single session period will win a 2014 Dodge Durango. Additional prizes include a trip to New York to attend the Anchorman 2: The Legend Continues movie premiere on Dec. 15. Contestants can view a teaser video and enter the contest at burgundydodge.com.

Throughout the competition, Dodge offers mini-games and challenges that share details regarding the features and attributes of the vehicle, which arrived in North American dealerships in October.

“The widespread conversation the (campaign) is generating has significantly increased awareness of the new Durango and is transforming that conversation into consideration,” says Olivier François, chief marketing officer at Chrysler Group. “Plus, this contest is really classy, just like Ron himself.”

“Hands on Ron Burgundy” is the Dodge brand’s take on the “Hands on a Hard Body” contest — first created by a Texas auto dealership in the 1980s, where contestants competed to win a car by keeping their hand on the vehicle the longest.

In related news, Dodge announced Tuesday it will offer special editions of the 2014 Dodge Charger and Challenger to celebrate its centennial. The 100th anniversary vehicles are scheduled to arrive at dealerships in the first quarter. John and Horace Dodge founded the automaker in Detroit.