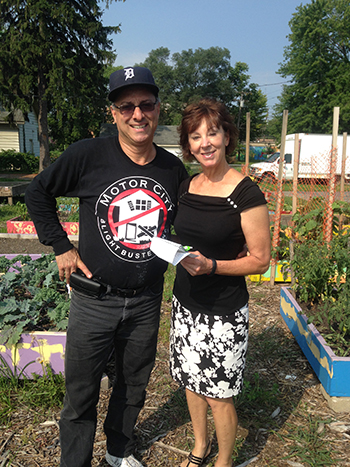 A documentary film about longtime Detroit community activist John J. George — and his mission to clean up blight in the city through his nonprofit Motor City Blight Busters Detroit — is set to air next week on Detroit Public Television.

“I remember covering some stories on what he was doing (to help the city) and thinking how wonderful it was to see somebody being active in the community like that,” Bransetter says. “He was creating pride and ownership in northwest Detroit.”

Branstetter says she decided to make the documentary last year after reconnecting with George. With a limited budget, she received funding through Meijer Inc.

George had helped the Grand Rapids-based grocery chain stabilize an area in northwest Detroit, where Meijer opened a store in June.

She says the 30-minute film includes interviews with George, former Detroit Mayor Dennis Archer, community activists, volunteers, and those who have worked with George.

“(George is) a unique, wonderful human being,” Branstetter says.

Urban Warrior will air on Detroit Public Television at 8 p.m. on Sept. 10. That evening, Motor City Blight Busters Detroit will host a screening and fundraising event at the Artist Village in northwest Detroit. Funds raised from the event will go toward a new roof for the Artist Village. â€‹