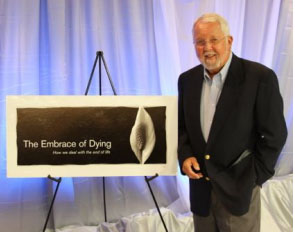 Local filmmaker Keith Famie will debut his eight-part series, The Embrace of Dying: How We Deal with the End of Life, at a private event at the Emagine Theatre in Royal Oak Sunday, the day before the series is aired on Detroit Public Television.

“We are certain through our featured professionals and personal stories of individuals and families facing end-of-life issues, we will create a dialogue about death and dying, for both young and old,” Famie says.

The Embrace of Dying series is part of a larger series by Famie, called The Embrace of Aging. He says the series will look into the history of hospice, the history of funeral directors in America, the right to die movement, and afterlife experiences, among other topics. He says the series includes interviews with mortuary science students at Wayne State Mortuary Science College, tours of cemeteries, including Mount Elliott in Detroit, and a look at the eulogy across different cultures. Erik Smith, a former WXYZ anchor, will host the series.

The series premiere, which airs at 7:30 p.m., includes interviews with a 96-year-old man still practicing medicine, metro Detroit funeral directors, and a psychiatric neuroscientist at Wayne State University. A new episode airs each Monday through April 4.

Famie is also working on a documentary on depression and suicide in America, called Death is Not the Answer. Famie also produced a 13-part series called Embrace of Aging: The Female Perspective of Growing Old and Maire’s Journey, the story of Maire Kent, who died of sarcoma cancer at age 24 and requested her ashes be sent to sea.