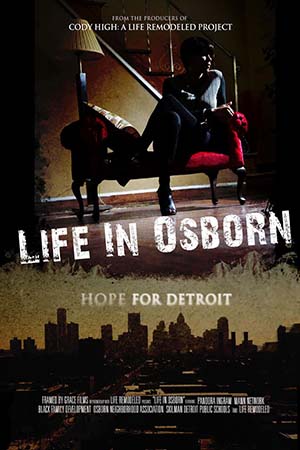 Life in Osborn, a documentary film about the efforts of Detroit-based nonprofit Life Remodeled to transform and improve the lives and the surrounding community of students at Osborn High School, will premiere at the Detroit Institute of Arts’ Detroit Film Theatre next week.

“Osborn was the most volatile neighborhood that we had invested in to date, but what we ended up discovering were incredibly resilient residents and students in the school and we saw a real story of hope,” says Chris Lambert, CEO of Life Remodeled. “We look for two things: significant need and radical hope. We really saw radical hope shining in the midst of darkness.”

The 90-minute film follows the Life Remodeled team as they renovate Osborn High School, remodel homes of the students at the high school, and remove blight and add beautification projects on the blocks surrounding the school.

Framed By Grace Films (which also filmed the documentary, Cody High: A Life Remodeled) shows some “amazing life transformations over the course of a year,” Lambert says.

“It ended up turning into this amazing story whereby we had far more residents from Osborn and youth than we’ve ever had involved in the project,” he says. “It’s always about remodeling with the neighborhood not for the neighborhood.”

Life in Osborn will premiere on Tuesday at the Detroit Institute of Arts. Tickets cost $10 and all proceeds go to Life Remodeled. The film will also air at the Maple Theater in Birmingham and the MJR Theater in Westland next month.

Lambert says Life Remodeled will focus their efforts next on Denby High School, which is located three miles away from the Osborn community.