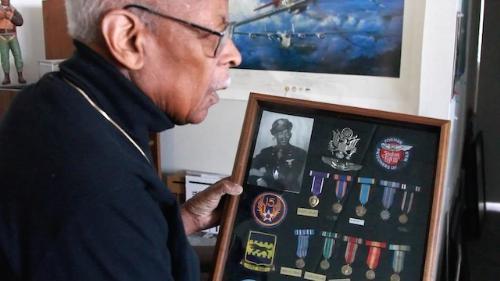 What started out as a small project to document the life of Lt. Col. Alexander Jefferson, a fighter pilot in World War II and member of the Tuskegee Airmen who spent nine months in a prisoner of war camp called Stalag Luft III, has turned into a major film effort.

“After we got involved in this project, there was just so much excitement about it that we decided we wanted to do a feature-length film,” says Mike Rott, owner of Dynasty Media Network in Ferndale. To be called, The Jacket: The True Story of a Second Class Hero, Rott says he “would like to see this in classrooms across the country and the world.”

Jefferson, 92, says the film will document the determination and perseverance of the Tuskegee Airmen, the first African-American military aviators in the U.S. Armed Forces who faced racism both within the military and at home during World War II. “The story needs to be told, and Mike is doing a fantastic job,” Jefferson says. “Our story is one of survival, which everyone can relate to. We want everyone to know, that despite the obstacles, we held our heads high and we survived and flourished.”

Rott has filmed Jefferson at various speaking events as well as in his Ferndale studio, which includes a 30-foot-wide green screen stage. To extend the project beyond a typical 45-minute short, Rott would like to bring in experienced animators and directors to fully round out the story.

The project is relatively new territory for Dynasty Media Network, which launched in 2010 and has mainly worked on video projects for medical and automotive clients including Henry Ford Health System and the North American International Auto Show. He recently started an Indiegogo campaign to support the project.

“(Jefferson) has devoted his whole life to sharing his story, speaking in classrooms and auditoriums and small groups whenever he can,” Rott says. “We just want to help get his story to as many people as possible, and we want to do it right.”