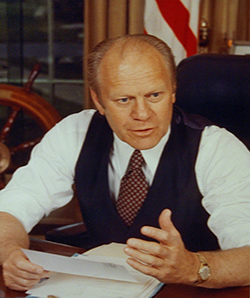 A documentary film about former U.S. president and Michigan native Gerald R. Ford has been commissioned by the Peter F. Secchia Family of Grand Rapids and the Gerald R. Ford Presidential Foundation.

“Our hope is that this documentary will not only reach audiences who are unfamiliar with Gerald Ford’s presidency, but also shed a new light on the importance of his character and his decisions that determined our nation’s future,” says Peter Secchia, a former U.S. ambassador and friend of President Ford.

New York-based Ark Media will produce the film and will feature never-before-seen archival materials, along with interviews with prominent leaders, historians, and members and friends of the Ford family.

“President Ford had a moral compass that guided his every decision, and he never wavered,” says Red Cavaney, chairman of the Gerald R. Ford Presidential Foundation. “As we all know, not every decision President Ford made was popular at the time, but popularity was not this man’s goal. He took pride in the strength of his Midwestern values, which played a significant role in his presidential decision-making, as well as his life.”

Ford grew up in Grand Rapids and served three terms as the representative from Michigan’s fifth congressional district.

Work on the film is expected to finish this fall. The film’s title and release date will be announced once broadcast and distribution partners are selected.