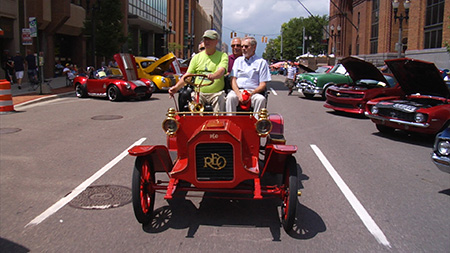 Lansing Works! Keep GM, a documentary about the campaign to save General Motors production in Lansing will screen at the Freep Film Festival in Detroit later this month.

The 67-minute film is a mix of archival footage and interviews and is produced by Lansing-based Message Makers, a communication company, and the Michigan Institute for Contemporary Art in Lansing.

Tom Lietz, director of Second Shift: From Crisis to Collaboration, says the idea for the film came to him from the people who were originally involved with the “Keep GM” campaign. The effort began in the mid-1990s when General Motors executives approached the then Mayor David Hollister of Lansing, and said they would end production of vehicles in the city after production of the Oldsmobile Alero was completed.

The ‘Keep GM’ campaign started with Hollister’s State of the City speech and evolved into a blue ribbon committee. “It involved people from all different parts of the community that might not normally work together on a project,” Lietz says.

Today, GM has two facilities in the Lansing area — the Grand River Assembly, home to the Cadillac CTS and ATS, and the Delta Township Assembly Plant.

Lietz says the film begins in the ’90s and carries through to present day. “There’s no finish line with something like this. It’s a continual effort,” he says.

The film will screen at Cinema Detroit in Detroit’s Midtown district on March 22. Lietz says he’s working to get the movie broadcast regionally within the next several months.