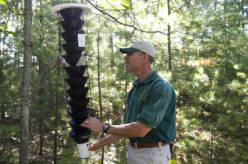 The Michigan Department of Natural Resources has released its 2016 Forest Health Highlights report, which breaks down forest health threats by examining insects and diseases, forest decline, and ongoing forest health research. Accompanying photos and maps illustrate the pests and show the effects they have had on Michigan’s forest system.

According to a forest utilization and marketing survey compiled by the DNR, Michigan’s timber sales program contributed $20 million to the state economy in 2016, supporting a total of 89,000 jobs throughout the industry.

The report highlights the DNR’s efforts to control spruce budworm, a native forest pest that periodically defoliates spruce and fir forests in the northeast. Spruce budworm infestations are likely to increase over the next 10 years, and efforts are under way to identify high-risk areas in state forests.

In turn, hemlock woolly adelgid, an exotic invasive insect that kills hemlock trees, was found in the west-central lower peninsula in 2015, and state agencies are working to develop a response strategy to inform the public. The Michigan Department of Agriculture and Rural Development (MDARD) is also leading the discussion around a proposed quarantine area in western lower Michigan that would restrict the movement of hemlock seedlings and trees.

The DNR works with MDARD, Michigan State University, and several others to address threats to Michigan’s forests.

“The key to preventing and slowing the spread of exotic invasive organisms in Michigan’s forests is public awareness,” says Roger Mech, a DNR forest health specialist. “The Forest Health Highlights report provides timely information about the condition of our forests and what’s being done to protect this important resource.”

Founded in the early 1800s, the Michigan Department of Natural Resources continues to conserve, protect, and manage the state’s natural and cultural resources for current and future generations.