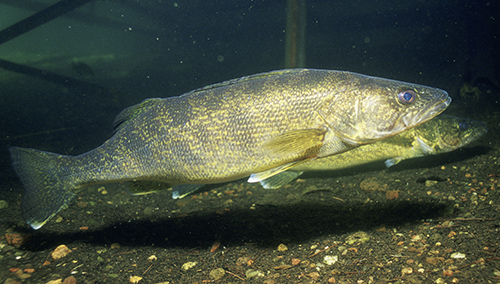 The Department of Natural Resources announced plans to boost Michigan’s economy and tourism by releasing up to 26 million fish including salmon, trout, and walleye into hundreds of lakes and streams throughout the state this year. Anglers spent $4.4 billion in trip-related expenses and equipment in the state in 2013, according to the America Sportsfishing Association.

Each spring, local fisheries managers and biologists begin performing surveys until the fall to assess local fish populations, Lesage says. Once the data is summarized and analyzed, they draft a management prescription requesting specific species and locations to stock.

The process allows fisheries managers to restore, enhance, and create new fishing opportunities in Michigan’s inland lakes and streams and the Great Lakes, he says.

This year, the DNR is releasing eight species of trout and salmon as well as walleye and muskellunge — raised in hatcheries and rearing ponds throughout the state — in more than 1,100 locations. The Michigan Fish Production system produces between 10 million to 40 million fish each year for stocking statewide.

“Fish stocking is occurring on some levels right now and has been over the past few weeks,” LeSage says. “This will go on into June then pick up again later in the summer.”

According to the Department of Natural Resources, the state claimed 1.1 million licensed anglers in 2011, ranking fifth in the nation for angler participation and drawing more than $11.2 million in federal funds for fish and aquatic habitat conservation.