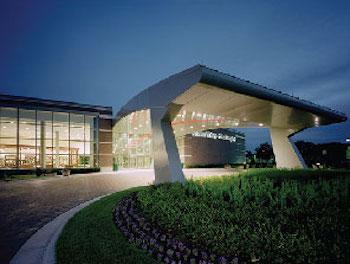 The Detroit Medical Center (DMC) today announced the appointments of Karima Bentounsi as CEO of Huron Valley-Sinai Hospital in Commerce Township and Conrad Mallett as CEO of Sinai-Grace Hospital in Detroit.

Prior to Huron Valley-Sinai Hospital, Bentounsi served as CEO of Weiss Memorial Hospital in Chicago. She has more than 10 years of health care executive leadership and management expertise, including operational planning, budgeting, and outreach initiatives.

Bentounsi received her MBA from the Keller Graduate School of Management at DeVry University. She is currently pursuing a doctorate in health care administration and is a member of the American College of Healthcare Executives.

“I had the pleasure and privilege of working with Karima during my time with Chicago’s Cook County Health and Hospitals System,” says Dr. Anthony Tedeschi, CEO of DMC. “I am excited for Karima and the Huron Valley-Sinai Hospital team as they work collectively to meet the health care needs of those in and around Commerce Township.”

Mallett has served as interim CEO at Huron Valley-Sinai Hospital since March. Prior to this position, he served as chief administration officer overseeing government and community affairs, facilities, security services, public relations, and media affairs.

From 2003 to 2011, Mallett served as president of Sinai-Grace Hospital. He joined the DMC in 1999 as senior vice president, chief administrative officer, and general counsel. Prior to joining the DMC, Mallett served as a member and then chief justice of the Michigan Supreme Court.

“Conrad brings vast experience and a high caliber of excellence to this new role,” adds Tedeschi. “His dedication and skill set are great assets for both the employees and patients of Sinai-Grace Hospital.”

The appointments of Bentounsi and Mallett will be effective Aug. 14.