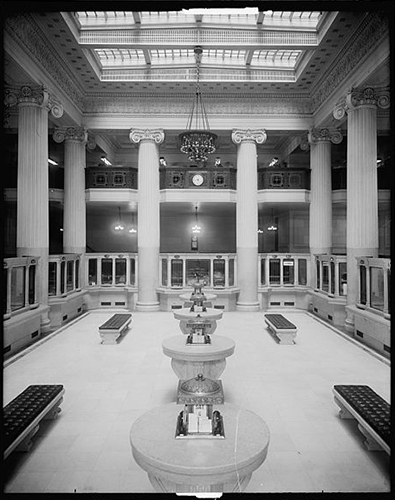 After meeting and working together at a restaurant in Ann Arbor, a trio of self-described foodies are coming together to open their own bar and eatery. Called Dime Store, the 75-seat restaurant is set to open by July in the first level of Chrysler House, a 23-story office tower located at Fort and Griswold in downtown Detroit.

“It will be an American brunch bar, which is a new concept for the central business district,” says Ann-Marie Murphy, co-owner of Dime Store with her fiancé, Larry Kahn, and investor Jeffrey Alexander. “We’ll be open for breakfast, lunch, and we’ll close at 8 p.m. We want to raise the bar for restaurants in downtown Detroit.”

Located on the Griswold side of Chrysler House, the restaurant will feature an open bar and an open kitchen, with seating for 13 people. The remaining seats will be set in the restaurant and a portion of the atrium lobby. The principals hired Chef Joshua Taylor, formerly with the Moto Restaurant and the Park Grill, both in Chicago. He was trained at the French Culinary Institute.

The menu, still under development, will include such dishes as duck bop hash, a take on a traditional Korean dish, as well as a Korean barbeque sandwich featuring marinated beef, pickles, and vegetables, and a veggie burger made with back beans, wheat berry, and other ingredients.

“We’re doing creative takes on classic dishes, so everything will be unique with high quality ingredients,” Murphy says. “We’ve partnered with Zingerman’s (in Ann Arbor), so we will be the only ones offering Zingerman’s coffee in downtown Detroit. As for the décor, it will be urbane and sophisticated, yet simple.”

The project is being handled by Ron and Roman, an architectural firm in Birmingham that has designed more than 200 restaurants.

The restaurant’s name pays homage to the original owner of the building, the Dime Savings Bank. The bank got its name when it allowed customers to open a savings account with as little as 10 cents.

Designed by famed architect Daniel Burnham, the building’s U-shaped floors offer plenty of window views. Opened in 1912, the structure has had several owners and was named One Kennedy Square before becoming Chrysler House.