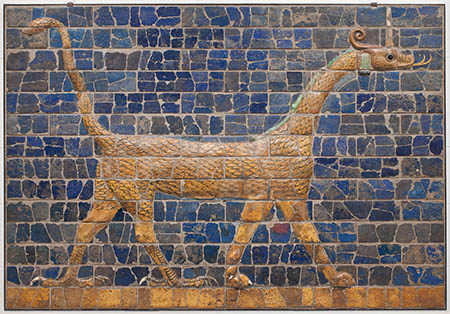 The Detroit Institute of Art’s Ancient Middle East gallery will reopen in October after closing down in 2007 during museum renovations.

“It’s particularly relevant to be reinstalling this collection and putting it out to the public right now given how much this part of the world has been in the news,” says Geoff Emberling, consulting curator for the installation. “Iraq, which is the heartland of ancient Mesopotamia, is one of the highlights of the gallery.”

The 2,800 square foot gallery, located on the first floor of the museum, focuses on the ways developing technologies have supported empires.

The gallery features a stone slab from the palace of an ancient king, a glazed brick panel with a serpent dragon design from the city of Babylon, and a few reliefs (a type of sculpture) from the city of Persepolis, among other pieces.

“When you see these processes at work in the archeological context of these ancient objects, it’s kind of thought provoking and makes us see our position in modern society in different and clearer ways,” Emberling says.â€‹

The gallery, which DIA officials have been working on for the past two years, will have an interactive “response area” where visitors will be able to answer a question about the gallery then watch it project on the wall, which they can email or tweet. There also will be a video showing the original archeological context of the pieces on display.

“I think this goes into a lot of the different dynamic, interpretative work the DIA has already done across the museum,” says Swarupa Anila, director of interpretive engagement for the DIA. “We want visitors to feel awe at the human ingenuity invested in the creation of these objects … and for people to think in new ways about art and its function in society.”

The Ancient Middle East gallery opens Oct. 2 and will also serve as the pilot for a multi-media tour, which will use beacon technology to alert visitors of different information. The museum will be developing the technology over the next year.

The Asian Gallery will be the next space to undergo a reinstallation.