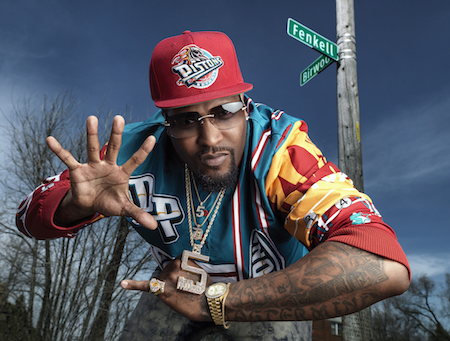 The Detroit Institute of Arts yesterday announced “D-Cyphered: Portraits by Jenny Risher” will be at the museum from Aug. 4- Feb. 18, 2018. Photographer and Detroit native Jenny Risher collaborated with local music artists, producers, and DJs to create portraits that tell the history, influences, and legacy of the city’s hip-hop music scene.

Risher’s photographs will take viewers into the recording studios, music halls, and even street corners where local hip-hop artists honed their craft. In addition to more than 80 full color photographs, an audio mix produced by Nick Speed will play continuously in the gallery.

“Jenny Risher’s poetic images bring hip-hop culture, which is so connected to Detroit, and the visual arts closer together,” says Salvador Salort-Pons, DIA director. “The exhibition illustrates the hard work, talent, and dedication of Detroit hip-hop artists and their influential musical legacy locally, nationally, and internationally. The photographs are relevant to so many in our community who have memories of concerts, dance performances, or listening to music of their favorite hip-hop artists.

D-Cyphered includes more than 230 hip-hop artists, producers, emcees, DJs, and promoters who were innovators and credited with creating and sustaining the genre. One section shows many of the artists in their neighborhoods and at the sites of the homes, schools, and places where they grew up, wrote lyrics, sampled, cyphered, battled and formed solidarity and rivalries with others who were part of the scene.

The exhibition is organized by the DIA and is included with museum admission, which is available at no cost to residents of Wayne, Macomb, and Oakland counties.