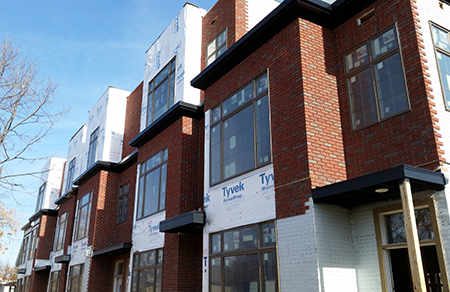 When Huron Contracting breaks ground this year on a 19-unit, midrise condo building in Ann Arbor, it’s unlikely that the plans will call for 19 identical designs, says developer Tom Fitzsimmons.

After all, Fitzsimmons has developed a sort of niche for customizable condominiums in the downtown Ann Arbor market. “It’s just like building a custom, single-family home, which is really appealing to our clients, especially the empty-nester set,” he says.

Under Fitzsimmons’ business model, Huron Contracting puts together a set of specifications and allowances and then provides a list of preferred vendors to the buyers regarding any changes they may want to make.

“We don’t let (buyers) just upgrade, we let them fully customize, which is a big difference,” Fitzsimmons says. “In fact, we give all of our clients the option to sit down with our architect at the beginning and redraw the floor plans for their units if they want. They can change anything as long as it doesn’t interfere with structural (components) or common hallways, things like that.”

Some elect to make minimal changes, such as simply rearranging a closet, while others move walls around to design a larger master bedroom.

And while Fitzsimmons says it takes a considerable amount of extra manpower to allow for that flexibility, he notes that there’s a clear benefit: The units sell faster because buyers feel they have input into the design.

“We hope to put a shovel on the (121 Kingsley West) project in the next 30 to 60 days, and we’re two-thirds sold out on that project already,” he says. “When we originally started planning the project, we were looking at building 25 units, but we ended up combining some because we had a demand at the higher end of the market.”

Fitzsimmons says that the preferred vendors list includes local mainstays, including Ferguson Plumbing and Fingerle Lumber Co. About two years ago, the company added to its list Scavolini by Cucina Moda, a Birmingham-based purveyor of custom kitchen and bathroom cabinets from Italy. Niki Serras, who co-owns the store with her sister Alisha Serras and brother-in-law Brian Gamache, notes that this approach is unlike anything she’s seen before.

“We’re familiar with the subdivision mentality, where you have a few upgrade options out of a catalog where clients have a few options to choose within the low, medium, and high (levels),” Niki says. “With Huron Contracting, any client can come to us and choose from our entire product line, which is fairly unheard of.”

Serras notes that the method allows for more creativity and, in a previous project with Huron Contracting, allowed Scavolini to provide traditional white, wooden cabinets for one unit and industrial stainless steel in another. “These were installed literally at the same time, so it’s been a really interesting experience.”

Huron Contracting is putting the final touches on a 16-unit condominium at 414 N. Main St. in Ann Arbor and plans to begin moving residents early next year. Fitzsimmons says he recently submitted for approval a similar project at 408 N. First St., which would likely break ground in summer 2015.