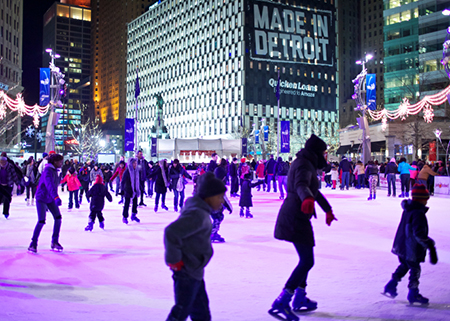 Meridian Winter Blast presented by Quicken Loans will return to Detroit’s Campus Martius Park in February, bringing with it with ice-skating, music, hot chocolate, and an array of winter-related activities.

“Winter Blast is a great weekend for the entire family to spend in downtown Detroit and enjoy the city’s great amenities,” says Bill Emerson, CEO of Quicken Loans, the presenting sponsor for the event. “Within just a couple blocks of the central business district, families can enjoy ice skating and other winter-themed activities, as well as warm up in the new destination retail and restaurant locations that have opened since last year.”

The signature event debuted in January 2005 to kick off the official countdown to Super Bowl XL in Detroit. The inaugural event drew more than 200,000 people, followed by nearly 1 million the following year.

“This family-oriented winter event helped usher in the renaissance of downtown Detroit and we are proud to be part of the city’s continual progress,” says Jonathan Witz, event producer for the three-day festival, which drew more than 75,000 people last February.

Event organizers are still looking for a sponsor for the snow slide, which has been a part of the festival in the past, Witz says.