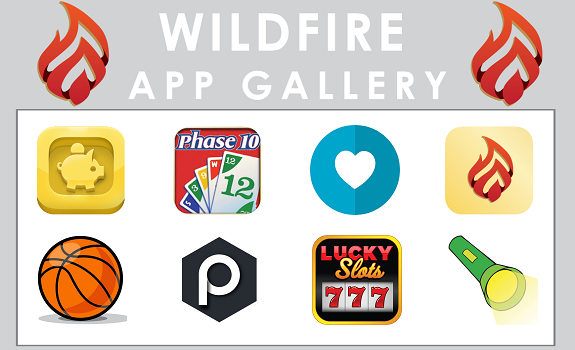 “User acquisition remains the biggest barrier to success in the mobile market. The space has become so convoluted that unless a huge marketing budget or a notable intellectual property is in place to back an app, it’s unlikely a developer will ever be able to attract the user base needed to make their app successful,” says Johnson.

“WildFire is here to fix that. By pairing the word-of-mouth marketing strategies that I used to make Phase 10 such a success so many years ago with the new capabilities enabled by today’s digital landscape, even the smallest of developers have a space to shine.”

WildFire is launching following more than a year of development focused on refining the API and building the infrastructure for the app gallery, WildFire’s consumer-facing hub of apps. The announcement also marks the launch of an open beta program centered around the app gallery, intended to scale the network and ensure the community of WildFire-enabled apps can help refine the consumer experience. While mobile developers of all kinds are encouraged to participate, the program will place a special emphasis on the indie game developers that experience some of the industry’s highest user acquisition costs.

Key features of the platform include cross-app virtual currency (users earn WildFire Coins by referring apps within the WildFire network), an app gallery (allows users to find new apps on WildFire), easy integration (allows WildFire’s technology to be integrated into any app), rich analytics (shows how users are referring apps), and complete control (developers retain control of how to best intergrate WildFire into apps). EyeWyre is one of the first developers to adopt WildFire for its mobile game squares2, coming soon to the iOS and Android. Including its owned apps and those developed on behalf of clients, the mobile developer has brought more than 200 apps to market — ranging from games to consumer apps to industrial interfacing.

“Over the years, we have tried countless platforms intended to solve issues with app discovery, user acquisition, and retention, but such solutions tend to be costly and siloed. WildFire is different,” says Matt Chartier, president and director of product development at eyeWyre. “Sharing a unified currency system means that achievements in one app can benefit others in the ecosystem. WildFire is taking an interesting approach to advance this paradigm shift away from siloed experiences, and we look forward to growing squares2 alongside WildFire.”