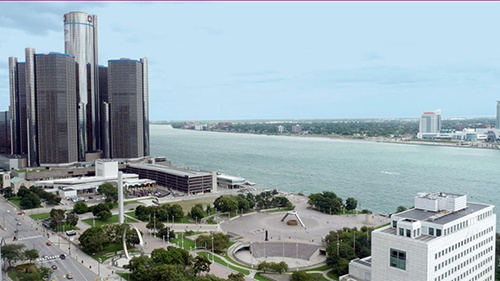 One of the region’s most storied and alluring dining rooms, the Top of the Pontch, will reopen by Labor Day. The iconic space on the 25th floor of the Crowne Plaza Pontchartrain Detroit Hotel, at Jefferson and Washington next to Cobo Center, will again offer near panoramic views of the skyline, the Detroit River, and Canada.

“We’ve reimagined the space for casual, fine dining that will be very refined,” says Justin Vaiciunas, executive chef and director of food and beverage services at the 367-room Crowne Plaza, which reopened last year following a major renovation.

“The Top of the Pontch will be open for dinner Tuesday through Saturday to start, and we are looking at offering lunch and a Sunday brunch down the road. We’ll have waterfalls and nearly everything is new, though we’ll use reclaimed wood (from Detroit) for the tables. There also will be glass-blown colored flowers in the ceiling.”

The cuisine will be “seafood centric,” complemented by steaks, chicken, and other entrees, Vaiciunas says. In addition to an a la carte menu, there will be a tasting menu offering six to seven selections. The space will offer three tiers of seating for up to 116 people “so that everyone can enjoy what is one of the best views of the city skyline,” he adds. The average entrée price will be $35 per person.

The Top of the Pontch complements the existing Summit Room on the 25th floor, which is a private dining area for up to 130 people (the space can be modified to accommodate several private groups at once). Or the entire floor can be booked for 170 people or more. As the Crowne Plaza works to reopen the Top of the Pontch, the hotel is in the midst of hiring 12 servers, six to seven cooks, and two to three managers.

The original hotel opened in 1965 and included plans for two towers, though only one was built. The original Top of the Pontch was one of the city’s most popular venues, serving as the setting for anniversaries, birthday parties, and professional milestones.

In addition to dining on the 25th floor, the Crowne Plaza has The Jefferson House on the first floor, which offers three meals a day, as well as The Urban Cellar, a popular bar. There’s also a 400-person banquet room. Long term, the Crowne Plaza plans to add a second tower and connect it to Cobo Center via an enclosed skywalk.