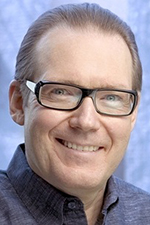 With more business operations becoming interconnected, owners should be thinking about what types of digital standards they can develop and implement over the next few years, says Michael Rogers, who will lead the keynote address at the sixth annual TechExpo14: Journey to Innovation at Detroit’s Fillmore in May.

“We can’t overestimate how much of our business is going to begin to take place in the virtual world (in next five to eight years),” says Rogers, author of the Practical Futurist column for MSNBC. “All businesses are going to be highly networked with other aspects of society (by 2020). It’s the ability to connect your inventory system to your distributors’ inventory systems, which will connect to the manufacturer — all of that sort of back office stuff is going to be very transformational.”

Rogers will touch on this, as well as increased productivity that will result from smart software and cloud systems, during his address “Business Technology by 2020: Science Fiction Becomes Reality.” What’s especially interesting is how inexpensive these cloud solutions are, he says.

“Everybody who’s using Google Drive — the cloud storage system — got an email (on Friday) announcing that the capacity they get is going to be quadrupled and the price is being chopped in half,” Rogers says. “How many industries are cutting prices like that? But it’s what we’re seeing.”

Other things Rogers will discuss include wearable technology — Google Glass is the equivalent of early cell phones, which were the size of a brick and cost $4,000, he says — and smart objects.

“There are four companies that are competing in this smart trashcan space,” Rogers says. “In Italy, the old streets are so narrow in the old European cities, that that when the trash truck stops to pick up a dumpster, it stops the whole town. You can’t get around it, so there’s a premium there on efficient dumpster collection.”

He explains that one company has placed sensors in the dumpsters trash containers that communicate with the garbage trucks, notifying them when the dumpster is full and ready to be picked up. “So I say, if we can make dumpsters smart, there’s a lot of potential.”

The conference, to be held from 8 a.m. to 7 p.m. on May 21 at the Fillmore in Detroit (former State Theatre), will include networking, hands-on experiences, and cutting-edge product solutions by more than 30 industry leaders in audio/visual technology.

Tickets are $55 in advance and $65 at the door. For the full event schedule and registration information, visit bluewatertechexpo.com.