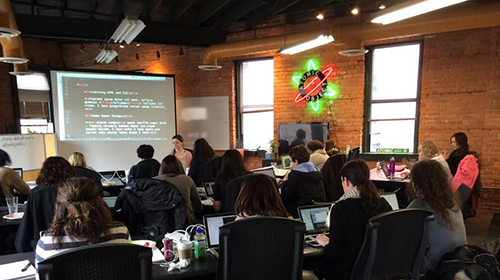 In just over a year, the Detroit chapter of Girl Develop It has introduced more than 400 women to software development — and they’re just getting started, says Michelle Srbinovich, the chapter’s co-founder.

“We’re definitely able to offer more classes now than we were able to in the beginning,” Srbinovich says. “Originally, we were just offering an HTML class, but then (we had more instructors) join the group, so we have more capacity. Right now, we’re averaging two classes a month, sometimes with the addition of a workshop or a community oriented event.”

Starting this month, the organization is teaming with Grand Circus, a technology-training institute and co-working space in downtown Detroit’s Broderick Tower, to offer a mentoring program that extends Girl Develop It’s services beyond training and classes and into career-focused events.

The Detroit Women’s Tech Mentoring Group will host quarterly events for women in, or interested in, STEM fields, with the kick-off meeting to be held at Grand Circus on April 9, says Leeann Drees, a freelance developer and instructor for Girl Develop It. Other future events are likely to include happy hours, speakers and panels, open networking, and speed-dating-style events to pair mentors and mentees, Drees says.

On April 30, the group will hold an event dedicated to web concepts and careers, which will provide attendees with a better idea as to what they need to learn if they’re breaking into the tech industry. “Recruiters will talk about what jobs are available, what (coding) languages people should know, and what they’re looking for,” Srbinovich says.

Drees says the idea for the mentoring group resulted from a December discussion hosted by Grand Circus about closing the gender gap in in the tech industry. “A recurring theme of all the discussions that evening was the need for mentorship and camaraderie among women in tech, many of whom mentioned feelings of isolation in such a male-dominated field,” she says.

Girl Develop It addressed the issue by offering a level playing field, Srbinovich says. “Our learning environment is very positive and non-competitive. We’re all about empowering women whether they want to become a developer or just learn something new,” she says.

Beyond the mentoring program, Grand Circus is also taking part in Google’s #40Forward program, which challenges 40 different tech organizations worldwide to help increase female representation in their startup communities by 25 percent this year.

As part of the challenge, Grand Circus is offering six women a full scholarship to the organization’s Build a Dynamic Website course, followed by a paid part-time internship doing development work.

“The key message here is that women are underrepresented in startup communities globally,” says Damien Rocchi, co-founder of Grand Circus. “We’re doing our bit in Detroit to tackle the problem. We know it’s an area we need to be better at, and you can only do better at things when you bring focus to them.”