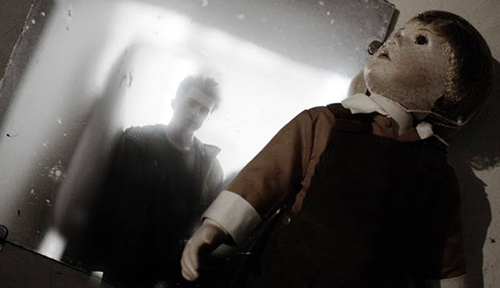 Klaws, a short film produced by Detroit-based SOS Productions, is beginning post-production after three days of filming in the city. Director Luke Jaden plans to market the resulting eight to 12-minute film to various outlets, with the ultimate goal of growing the short film into a feature-length piece.

“My plan is to pitch it to a few distributors and see what they think about it,” Jaden says. “If there’s no response, I’ll submit it to notable festivals like Cannes, Tribeca, Sundance, and SXSW and see if there’s any interest from distributors or investors there. We’ll see what happens”

Characterized as a fantasized horror thriller, similar in style to Pans Labyrinth and Inland Empire, Klaws tells the story of a haunted house occupied by a monster, played by Dan John Miller. Save for five actors, all of whom are introduced at the end of the film as a new family moving into the home, the film has few characters.

“A ‘characterless’ movie sounds impossible, if not insane, but that, of course, suggests that the entity is not a character,” says Josh Malerman, who wrote the short film. “This, we all know, isn’t true. In the best haunted house movies, the entity is paradoxically the star. The feature Klaws shines its spotlight on that.”

Where the film lacks in cast, it made up in crew, especially in the art and lighting departments, Jaden says. “There were about 35 to 40 crew members involved in this project. You have to be more creative (with so few characters). It’s very artistic.”

While the monster is the star of the show, Jaden says the audience will hardly ever see him. “When you do, he’s very grainy and blurry, so you can’t really see what this thing is. You just see that it’s suffering and experiencing a roller coaster of emotions.”

Another short film by SOS Productions — Madman or Matyr, a documentary about abolitionist John Brown — was recently picked up by the Charles H. Wright Museum of African American History in Detroit.