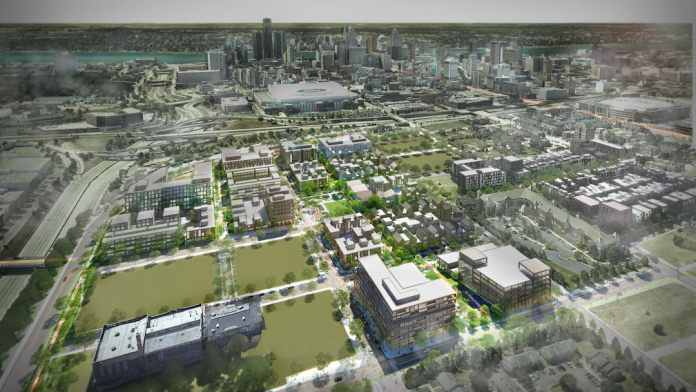 Detroit’s Rossetti, a large architectural design and planning firm, Monday announced it has been retained by Bedrock to create a master plan for a more-than-$300-million mixed-use development on the now-vacant site of the former Brewster-Douglass public housing project.

The development will occupy about 22 acres and dozens of buildings near I-75 south of Mack Avenue near the Brush Park neighborhood. Rossetti’s plan includes 913 apartments, condos, and townhouses for people of all income levels, more than three acres of public space, 19,000 square feet of retail space, 60,000 square feet of childhood education space, and a hotel with about 80 rooms.

“This is an ambitious project that will honor this neighborhood with a rich history, and we are proud to be part of it,” says Matt Rossetti, president of Rossetti. “The master plan considers all populations and need for amenities, high-quality public spaces, and educational opportunities to the area’s existing and future residents.”

The master plan includes an integration of the historic street grid back into the site.

“It was important to reintroduce the urban street network to this site and connect to the adjacent Brush Park neighborhood,” says Amy Chesterton, director of urban planning at Rossetti.

The plan also calls for public spaces that were conceived with the support of GGN, a landscape architecture firm based in Seattle.

“The cornerstone of our planning work was centered around these spaces and how they will benefit the neighborhood and its residents and impact their daily lives in a thriving, urban neighborhood,” says Chesterton.

Construction is expected to begin next summer and will likely be completed in phases, with some of the first units expected to become available two years after construction begins. The plan includes more than 150 units designated as affordable, or about 25 percent of total rental units on the site, whichever is greater. These units will remain affordable for at least 30 years, pursuant to Bedrock’s affordable housing agreement with the city of Detroit and approved by the city council in July 2017.

Bedrock is part of the Quicken Loans Family of Companies in Detroit, and it owns and maintains more than 100 buildings in downtown Detroit, Brush Park, and Corktown.