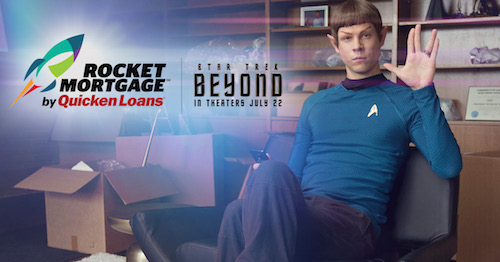 Detroit-based Quicken Loans’ Rocket Mortgage, an online mortgage approval service, has partnered with Paramount Pictures to create themed television commercials prior to the July 22 release of the film Star Trek Beyond.

Through the partnership, Rocket Mortgage has released two commercials created by Los Angeles-based agency Pitch which follow Vulcans — the fictional extraterrestrial species in the Star Trek franchise who originate from the planet Vulcan — as they use Rocket Mortgage to help them finance a new home.

“The decision to partner with Paramount Pictures was a logical one,” says Jay Farner, president and CMO for Quicken Loans Inc., Rocket Mortgage’s parent company.

As part of the campaign, the lender will launch a “Live Like a Vulcan” sweepstakes where those who enter will have the opportunity to win Star Trek-themed items featured in the commercials, a year’s worth of mortgage payments, and more.

One grandprize winner will also receive a trip to the world premiere of the new Star Trek film in San Diego.

“This Rocket Mortgage campaign is clever, creative, and sure to amuse and excite Star Trek fans just ahead of the release of the new film,” says LeeAnne Stables, president of worldwide marketing partnerships for Paramount Pictures.