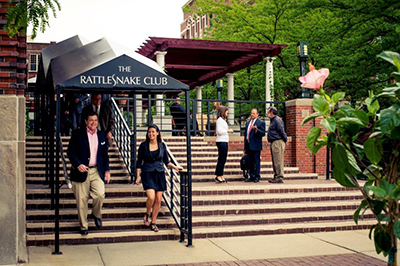 The 13-part series, follows Rattlesnake chefs Chris Franz and Jeff Lanctot as they shop for fresh ingredients at Eastern Market to create recipes that will be served in the restaurant.

“At Eastern Market we’re always looking for new ways to connect growers and producers to restaurants and other institutions like schools and hospitals,” says Christine Quane, wholesale market manager for Eastern Market Corp., the nonprofit organization that operates and manages the market.

The first two episodes, now available at rattlesnakeclub.com, cover the history of the produce district, introduces the Eastern Market and Rattlesnake Club teams, and walks viewers through such entrees as grilled filet of beef with Michigan morel and cream sauce.

Each recipe, posted alongside the episode, pairs a wine selected by Master Sommelier Maria Papp, wine director at the Rattlesnake Club.

“This is the part where we really get into sharing with you, our guests, what we do here, what we’re passionate about here,” says Alexandria Franz, spokeswoman of the Rattlesnake Club, of the second episode, which highlights Michigan ramps, or wild leeks. “That’s local produce, local products. Eastern Market is full every single weekend, and I unfortunately know too many people who have never been there.”