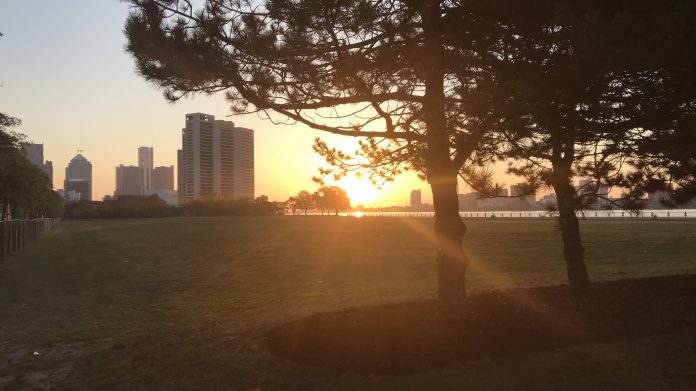 The Ralph C. Wilson Jr. Foundation in Detroit today announced a $200-million investment in parks and trails in southeast Michigan and western New York. The gift honors the foundation’s namesake on his 100th birthday. Each region will receive $100 million.

The parks will be created at West Riverfront Park in Detroit and La Salle Park in Buffalo, N.Y. Each will be renamed Ralph C. Wilson Jr. Centennial Park.

“We are proud and honored to celebrate Ralph’s birthday today with a lasting gift that matches in scale the passion and pride he had for his hometown of Detroit and adopted hometown of Buffalo, where he founded and owned the Buffalo Bills,” says Mary Wilson, widow of Ralph C. Wilson Jr. and life trustee of the Ralph C. Wilson Jr. Foundation. “Ralph was committed to exercise, staying active, and enjoying life. It would make Ralph so happy to see people of all ages enjoying these enhanced parks and trails for years to come.”

“Parks and trails have an incredible impact on communities, inviting usage from all ages, neighborhoods, and people, promoting inclusiveness, and breaking down barriers. They not only connect people to each other, but to other destinations and assets across a region,” says Jeffrey Littmann, life trustee and board chair of the foundation. “These projects also take collaboration from all levels of community to be realized. It’s this teamwork and hard work that Ralph valued so much.”

“With this incredibly generous gift, the Wilson Foundation will help us create a spectacular riverfront park and recreational opportunity that will be enjoyed by Detroiters for the next 100 years,” says Detroit Mayor Mike Duggan. “Equally important is making sure that residents in our neighborhoods have easier access to their city’s riverfront through projects like the Joe Louis Greenway.”

The foundation provided support to the Detroit RiverFront Conservancy in 2017 to lead a community-driven international design competition for the West Riverfront. Michael Van Valkenburgh Associates, a New York-based landscape architecture firm, was selected as the winning firm of the competition.

“This generous gift honoring the legacy of Ralph C. Wilson Jr. is recognition of the conservancy’s success in transforming the riverfront into a gathering place for all,” says Matt Cullen, chairman of the Detroit RiverFront Conservancy. “This work is possible through the involvement of our community and our funders. The creation of this new park will be one of the most significant public space projects undertaken in our city’s history, and it will provide tremendous benefits to youth and families in our community and throughout the region for generations to come.”

The Ralph C. Wilson Jr. Foundation is a grantmaking organization dedicated primarily to sustained investment in the quality of life of the people of southeast Michigan and western New York.

Following enlistment in the U.S. Navy during World War II, where he served in the Atlantic and Pacific theaters, Wilson returned to Detroit and took over his father’s insurance business. A one-time minority owner of the Detroit Lions, Wilson went on to acquire construction and manufacturing operations, along with radio and television stations, and was founder of Ralph Wilson Industries.

In 1959, he started the Buffalo Bills with the fledgling American Football League. The team was an immediate success and the team won AFL championships in 1964 and 1965. The league merged with the National Football League in 1970. The Bills went on to play in four consecutive Super Bowls (1990-93), and lost all four games.

Prior to his passing in 2014 at the age of 95, Wilson requested that a significant share of his estate be used to continue a life-long generosity of spirit by funding the Foundation that bears his name. The Foundation has a grant-making capacity of $1.2 billion over a 20-year period, which expires January 8, 2035.